Home » If God is good, why does evil exist? 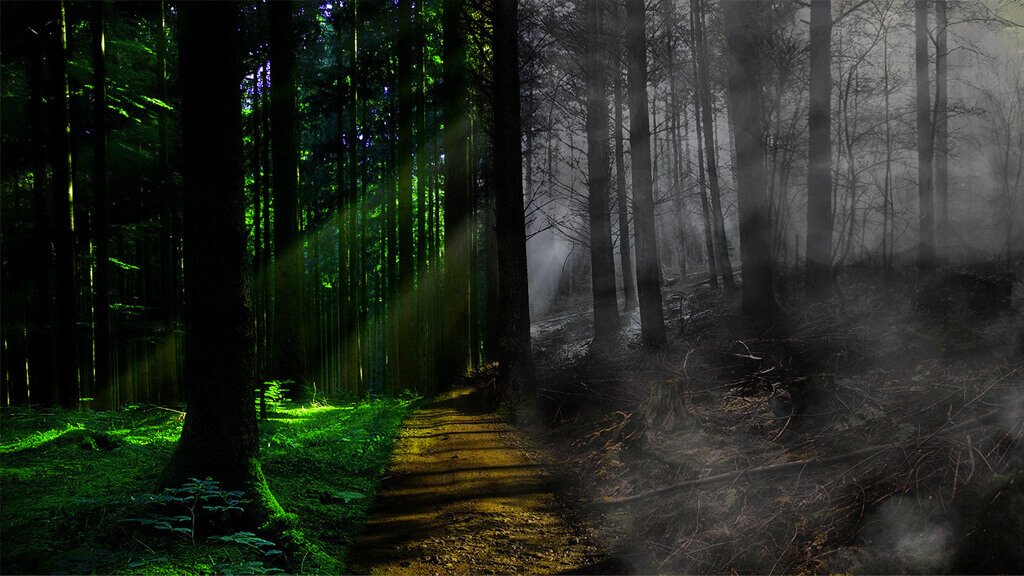 If God is good, why does evil exist?

The God and evil question is one of those questions that’s been asked repeatedly by both believers of God and atheists. This is also one of the first major questions I remember having as a child.

Of course, I never received a straight answer that made sense.

It wouldn’t be until recently that I am able to answer this question fully and correctly so that many can benefit from this knowledge.

The answer is quite simple, but in a mind split by conflicting thoughts, it can seem difficult to isolate only what is true.

This article aims to dispel all illusions surrounding this topic so that the truth can be clearly seen.

By the end of this article, you’ll know exactly why evil seems to exist and what you have the power to do about it.

There is a common belief that God created the world including angels and humans. It is also a belief that one of the angels defied God, fell from heaven, and is the father of evil.

This angel has been called many things such as the devil, Satan, and Lucifer. What’s funny is that “Lucifer” means bringer of light, but that’s another topic.

Although religious texts do not serve as concrete proof, accounts of God creating the world and mankind are outlined in many of those texts throughout numerous cultures.

However, the details surrounding angel creation and furthermore an angel falling from heaven are not found in these texts. It seems to be more speculation than fact.

Well, what is evil?

Before we dive fully into why evil exists, let’s first come to a consensus of what evil is said to be.

I’m going to breakdown the dictionary’s definition to get the most basic explanation similar to what I did with happiness in the article How To Be Happy All the Time.

It sounds like evil is one of two things:

How are right and wrong determined?

Since we know that evil is partly defined as going against what’s right, the next logical question is what exactly is right?

Just to get the definitions out of the way, right is defined as:

Most of these definitions lead to more questions, not answers. For example, justified or acceptable by whom? And shouldn’t all facts be true?

One thing I know about truth is that what is true is always true no matter what. It is also true for all without exception. If truth was not all-encompassing, then it would not be truth.

There’s a fact that 1 in 5 adults in America experiences a mental illness, but this isn’t true always depending on which 5 people you ask. It fails the truth test.

For the purpose of truly understanding the answer to the God and evil question, let’s disregard facts and focus only on truth for the remainder of this article.

This means that what’s right should be what’s true.

Yet who among us would be considered truthful enough to justify or accept someone else’s behavior?

Since the majority of beliefs are based on fact and not truth, no person can accurately judge another. Herein lies the barrier that seems to obstruct the truth from vision.

Assuming God is good, then God would be the only One to accurately say what is real and true.

If God determines what’s good, then God must represent truth. This mean God exists always, never changes, and extends to all without exception just like truth.

Since it’s only possible to create of yourself, then what God created must follow these same rules. The rules are that God’s creations exist forever and are perfectly good.

You may be thinking, “Well I change, am I not real?” Hmmm.

Your thoughts and emotions do change. Even your body changes. However, there is one constant, you.

Since you have always existed unaffected by these things, you must be truth and these “things” must be false.

You have confused your identity with that which never was and so you act accordingly.

You try to create that which is not of God and so your creations seem to fade with time.

Some of you may now be asking the question that, if God creates what is permanent and the body clearly isn’t, then who created the body?

We’ll come back to that. First, let’s discuss death.

What do we already believe about death?

This seems logical. If there is death, something must be living in order to die.

Is the opposite true; can life come from death?

It doesn’t seem so. Death cannot exist without life.

Does this mean death can exist within life?

I’m sure you’ve heard many stories of people being brought back to life. They all had one thing in common. They still experienced something while they were supposedly dead.

If you’re experiencing something, you can’t be dead, right?

Is your brain tingling yet? Good. 😁

I said earlier that you can only create of yourself. For example, apple trees make apple trees. Horses make horses. People make people, except people seem to make a lot more.

The above is proof that people must be more than just bodies.

So if God creates of Himself, this means that God creates gods. And what makes God God is that God is unlimited in His Creations.

If being in a body means you are limited by what you can do, then either the body is misperceived, or God did not create any “body”.

What’s even more interesting about this is that evilness is defined in regards to the body.

There is none. That means God really is good.

To put this another way, what’s happening is similar to you confusing your identity with a shirt. You immediately feel in danger because a shirt could be ripped, worn out, cut, burned, stolen, etc. So you cover it up with another shirt to “protect” it.

It’s only after the shirt seems to wither away that you realize, “I ain’t no shirt!” And you regain consciousness. Yet if you still value shirts, your focus changes from consciousness back to illusion, and the cycle repeats.

Read the parable of The Painting. It’s much better than this shirt example. 😁

The true maker of evil

Once again, you can only create of yourself. So to even perceive evil is to perceive being evil.

I must say this again.

You can only create of yourself. So to even perceive evil is to perceive being evil.

Thus the evil you see is of you. You value evil acts because it bears witness to the false belief that you are a body.

Evil becomes your twisted idea of salvation. It attempts to hold this illusion of bodies and death in place.

You have created something so unbelievable that you literally fight for the “right” to believe it. But to fight for a right is an oxymoron. What’s right (or rather what’s true) does not need soldiers for it to remain true. Only the lies (or rather illusions) need constant attention.

Evil does not exist. It is a false belief that you carry with you from moment to moment.

You attempt to speak it into existence each time you bear witness to so-called evilness. You are its preacher and sustainer.

In addition, you place evil above God because you think it’s something to be feared or a mistake that God made.

Fortunately, God is Love and that which is love sees no evil. It sees only love.

Will you stop making evil and make love? 😏